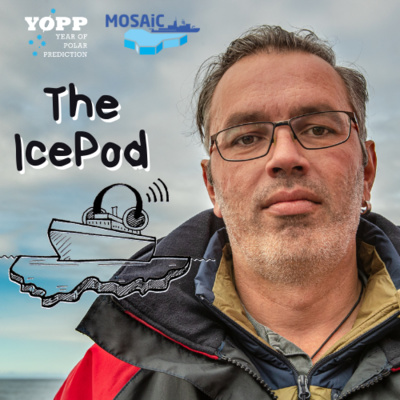 Surprise, surprise! After the final episode with Matt Shupe, we have another one for you. In this German edition of The IcePod, we talk to Captain Thomas Wunderlich who took over the command of the German research icebreaker RV Polarstern for leg 4 and 5 of the MOSAiC expedition in June 2020.

Thomas Wunderlich is one of currently three captains on board Polarstern; together with his colleague Captain Stefan Schwarze he made sure that scientists could carry out their work during the one-year drifting MOSAiC ice camp in the central Arctic. How to become the captain of the 39 year-old Lady Polarstern, and what is the role of a captain when the ship is not actively moving but just drifting through sea-ice floes? Not only we learn about the bunch of items Thomas Wunderlich always takes with him aboard when leaving for the north or south (we only mention 'night socks' here), but also we hear about how to pursue a career at sea, about the different marine officer grades and on the general aspects of seafaring in Germany and around the world.

'There are the dead, there are the living, and there are sailors', Thomas Wunderlich quotes an unknown source; his life is divided into six months at sea and six months at home each year, both being intensive times of living, and yes, Thomas Wunderlich also likes to be on land, using his spare time for work in the garden or to explore the beautiful Spreewald area south of Berlin, which is home for Captain Wunderlich.

Wunderlich tells us about the moment, many years ago, when for the first time he had heard that something called the MOSAiC expedition was discussed. And he revisits with us the precious moment when he met his Captain colleague Stefan Schwarze somewhere at the sea-ice edge in June last year. Yes, he can't deny, they gave each other a hug when he took over the command after leg 3. After all, in times when it is uncertain whether a MOSAiC expedition can continue even under pandemic circumstances, it was also his endorsement to expedition lead Markus Rex to keep on going, thanks to the brilliant logistic efforts that made seemingly impossible things possible.

There is one common goal at a research vessel, which is making the scientists happy by enabling them to do their research; for which both parties need to be treated overly respectfully on board, and this has worked out very well for Thomas Wunderlich's leg 4 and 5 of MOSAiC. "While we, the captain and crew, can take water samples, we cannot analyze them. But at the same time, if there wasn't us, the ship would still sit in Bremerhaven." In October 2020, after one year in the ice, Thomas Wunderlich maneuvered RV Polarstern back home to Bremerhaven. The moment has been hilarious and very emotional when the vessel entered port on a sunny early October morning, accompanied by the many welcome-honking escort boats and happy-waving people at the quay.

If you miss the music, find Thomas Wunderlich's playlist on Spotify https://open.spotify.com/playlist/0WL49FCRP76g5QR2cipqGe

For updates and other materials, check also our website https://theicepodcast.home.blog/

The Drake Lake & the Drake Shake – The IcePod with Nina Gallo

Episode Ten – Binoculars are My Weapons

Episode Nine - Hugs, Dips in Melt Ponds, and WiFi on the Ice

Episode Eight – Snowflakes, Pee Bottles and a Mosaic of Floes