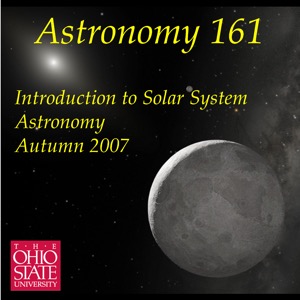 Beyond the orbit of Neptune lies the realm of the icy worlds, ranging in

Eris, all the way down to the nuclei of comets a few kilometers across.

the Solar System, discussing the basic properties of Triton (the best

studied such object), Pluto, Eris, and the Kuiper Belt, introducing the

dynamical families of Trans-Neptunian Objects that record in their

orbits the slow migration of Neptune outwards during the early history

of the Solar System. The Kuiper Belt is the icy analog of the main

Asteroid Belt of the inner Solar System: both are shaped by their

gravitational interaction with giant gas planets (Jupiter for the

asteroids, Neptune for the KBOs), and are composed of leftover raw

materials from the formation of their respective regions of the Solar

campus of The Ohio State University.

Lecture 46: Are We Alone? Life in the Universe

Lecture 45: Exoplanets - Planets Around Other Stars

Lecture 39: The Moons of Jupiter