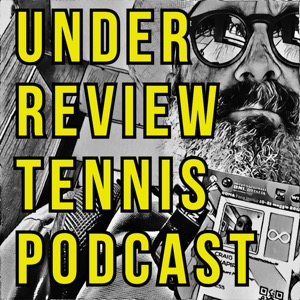 Leo Lavalle , the winner of the 1985 Junior Wimbledon Championships,  has lived an incredible life in tennis.

As a pro he rose to 51 in the word and posted wins over Brad Gilbert, Anders Jarryd, and Stefan Edberg.   After the great Hall of Fame player Raul Ramirez, he is the best player to have come from his country, and as a Davis Cup stalwart carried the hopes and dreams of Mexican tennis onto the court with him for a record 14 years.

On this episode of Under Review,  Leo Lavalle, now a  broadcaster for ESPN’s tennis coverage in Mexico, is going to explain why the Acapulco Open is fast becoming a tennis fan destination.  He’ll share what it was like to turn pro in the mid 80’s as racquet technology and fitness regiments were changing drastically.  Leo will explain why Davis Cup was where he played his best tennis, and why the team format  was so important to him.   He'll tell us about a 16 year old Spanish phenom that he thinks is a male version of Coco Gauff.  And he’ll share who he think can beat Rafa Nadal at Roland Garros.  Leo Lavalle joined us from his home in Carretero , Mexico.  We talked about tennis in length, via Skype.

Related Episodes of UNDER REVIEW:

UNDER REVIEW is a podcast in which tennis insiders share unique stories and insightful perspective. For more information, please contact [email protected]

To see Leo Lavalle playing in Davis Cup check out this  link,

And check out The Malibu Racquet Club: https://www.maliburacquetclub.com/