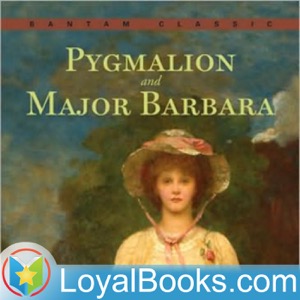 If you've watched and loved the delightful musical My Fair Lady, then you'd love to read the wonderful play on which it is based. Pygmalion by George Bernard Shaw is equally engrossing and as full of charm, wit and underlying pathos.

First performed on stage in 1912, Pygmalion takes its title from the Greek myth of Pygmalion and Galatea. In the ancient story, a brilliant sculptor, Pygmalion falls in love with one of his own creations, a ravishingly beautiful sculpture whom he names Galatea. He propitiates Aphrodite, who grants his wish that his statue would come to life and that he could marry her. His wish is granted and the couple live happily ever after.

Shaw's play uses the symbolism of the myth to show how a human being can be molded into anything that another wants. It is also Shaw's most popular and best loved play and gave him the distinction of receiving both the Nobel Prize for Literature and an Oscar Academy Award!

The play opens one rainy night in Covent Garden. Theater-goers take shelter from the downpour in the porch of St Paul's. A poor flower girl, Eliza Doolittle, plies her wares. In the shadow of one of the pillars, a mysterious man is making notes of everything she and everyone else says. He begins amusing the small crowd by accurately deducting where each speaker comes from, based on the way he or she speaks. An elderly gentleman is most intrigued by this and introduces himself as Colonel Pickering of the Indian Army and an expert on dialects. The note taker is Professor Henry Higgins, a scholar of phonetics. Higgins is a braggart and boasts of his being able to use the science of phonetics to making any flower girl sound like a Duchess! Colonel Pickering immediately takes up the challenge.

The two gentlemen “adopt” Eliza and then begins a rigorous regimen of transforming her into a Duchess. The goal is to present her at an aristocratic dinner party, where Eliza is expected to be passed off as a high society lady. An amusing and sometimes poignant story follows, as Higgins and Eliza discover that human beings are not mere marble and ivory sculptures.

Written specially for Mrs. Patrick Campbell, whom Shaw was supposed to have been deeply in love with, the role of Eliza is of a girl full of high spirits, street smartness and innocence. Higgins is sarcastic, witty, impatient, arrogant and obnoxious, but he is also a gifted teacher. Colonel Pickering is the perfect gentleman and a foil to the Professor's rudeness.

In all, a delightful comedy that has not lost a bit of its shine more than a century after it was first written!

Jensen Karp, comedy writer and producer, sits with his mother, Haroldine, a few times a month to give advice to listeners who are brave enough to send in relationship questions to [email protected]