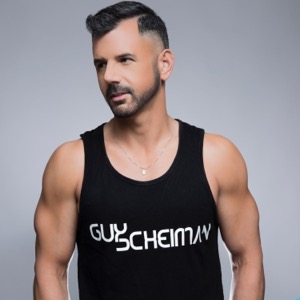 Guy Scheiman is one of the most successful DJs and producers on the international club scene, with club bookings that span the globe and official remixes for some of the world’s biggest stars, including JLo, Kylie Minogue, Rihanna and Lady Gaga.

Based in Tel Aviv, Scheiman is known for his high-energy sound that combines house, progressive, tribal and tech house with strong melodies and memorable vocals. His live sets feature strong grooves and powerful bass-lines that ignite his dance floors and create euphoric experiences. And, his official remixes and original productions stand out as massive club anthems that combine his love for high-energy beats with passionate melodies and memorable breaks.

“Music is food for the soul; it’s a wonderful getaway from our daily life. It has a key role in making our life brighter. For me, what is the most important is to make people happy with my music. It’s an art form and when I see my work being appreciated by a crowd it means the world to me. I hope I can keep people happy through my music for many years to come”

In 2013, Scheiman headlined three of the continent’s biggest PRIDE festivals: Madrid (Kluster), Amsterdam (Bear Necessity), and Tel Aviv (Papa Party). Outside Europe, Scheiman has toured extensively in the United States, Brazil and Mexico – where he headlined the world-famous G-Music Fest in 2012. In 2014 Scheiman headlined Jeffrey Sanker’s White Party Palm Springs and debuted his DJ skills in Canada for Fly Toronto closing events along with Beijing and Shanghai. Guy Scheiman is global!

Scheiman has been commissioned for official remixes by some of the world’s biggest and most reputable record labels – including Universal, Interscope, Sony, Capitol, Atlantic and TommyBoy.

In 2015 Scheiman released his own label "Guy Scheiman Music" with hot originals and remixes that are hitting the dance and billboard charts across the globe.

With a growing roster of major bookings in Asia and the Americans already planned for next year, plus more exciting remix and original production work on the way, Scheiman will continue to make his mark on the dance music scene and draw thousands of fans to his events from now into 2016.

Rise Up - Mixed By Guy Scheiman

The aim is simple, the task probably not: two people attempt to write and record an album, in one year, while holding down full-time jobs - a process we are now calling ‘Tunelighting’. Can it be done?

In this podcast series, friends Jack Edwards and Rob Wreglesworth will document their journey from day one - where they have no band name, no songs and no idea where to start - to day 365, where they will (hopefully) have a completed musical record.

Each episode will cover a different subject related to recording music at home, sharing tips, insights and lessons learned along the way.

The hope is that this podcast can act as a template for anyone else who wants to try Tunelighting!

The podcast is brought to you by MusiciansHQ.com