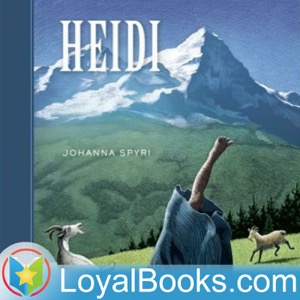 Filled with descriptions of the magnificent Swiss Alps, the lives of the simple country folk who live in their picturesque peaks and valleys and the gentle and innocent days of childhood, Heidi by Johanna Spyri is a book that no child should miss reading. Since it first came out, it has captured the hearts of children (and adults) all over the world, been extensively filmed, televised and staged and translated from the original German into more than 60 languages. Heidiland, a theme park, is one of the big attractions in Zurich.

Heidi The Girl from the Alps by Swiss children's author Johanna Spyri was published in two parts in 1880. It tells of Heidi, a little Swiss girl whose parents' sudden death leaves her to be brought up by her aunt. Aunt Dete is a career-woman who though she loves Heidi, does not have the time or resources to look after a child in busy Frankfurt. She leaves Heidi with Heidi's grandfather, who lives in the Swiss mountains. The lonely, embittered old man lives like a hermit on the mountain-top and has nothing to do with the people in the village below. Known to all as “Alm-uncle” Heidi's grandfather is good-hearted but mistrustful of the villagers. He refuses to send Heidi to school and allows her to roam the pastures with a young goat herder, Peter. They become good friends but events take a turn when Aunt Dete decides that Heidi must stay in Frankfurt and learn to earn a living.

She is employed as a companion to a rich invalid child, Clara, and soon learns to read and write along with the little girl. The city begins to take its toll on the young Heidi and she becomes ill and depressed. How Heidi returns to her beloved mountains, reforms her crotchety old grandfather and helps Clara regain her health forms the rest of this delightful story.

This unassuming and easy to read book remains fresh and unspoiled, still receiving an enthusiastic response throughout the world. Generations of kids have enjoyed reading about the naïve and spontaneous Heidi, the mischievous Peter, the bitter and lonely Alm-uncle, the strict and authoritarian housekeeper Fraulein Rottenmeier, the long-suffering Clara and Clara's kind and gracious grandmother Frau Sesemann.

This sweet and charming story earned eternal fame for its shy, retiring author who endured several personal tragedies and wrote many other pleasing stories, but none so famous as Heidi, The Girl from the Alps.

Chapter 1 – Up the Mountain to Alm-Uncle

Chapter 2 – At Home with Grandfather

Chapter 3 – Out With The Goats

Chapter 4 – The Visit to Grandmother

Chapter 5 – Two Visits and What Came of Them

Chapter 8 – There is Great Commotion in the Large House