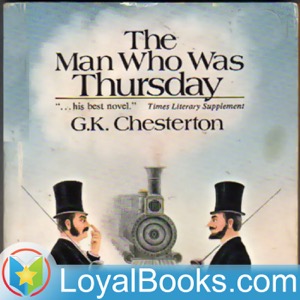 The Man Who was Thursday by G. K. Chesterton

Two poets in a London park at sunset, debating on the attributes of poetry and whether it's really a metaphor for anarchy. A group that meets in secret, planning to overthrow the world order. Disguises and deceptions, ideals and ideology. A medley of themes and genres makes this a great read for anyone who's a fan of Chesterton and his iconic Father Brown.

The Man Who Was Thursday includes Chesterton's favorite theme of Christianity with touches of delightful humor to enliven the twists and turns that abound throughout the book.

Set in the early part of the twentieth century, the novel's main protagonist, Gabriel Syme is a Scotland Yard detective who's assigned to break the trend of anarchic groups mushrooming all over London. He hides his true identity and takes on the role of a poet. He meets Lucian Gregory, also a poet, and they become friends. One evening, they get into a passionate debate on the true function of poetry and whether it is a symbol of revolution. As the debate rages on, Gregory is incensed and indiscreet enough to confess that he is part of a secret group that espouses anarchy. The group meets in a remote public house in Chiswick on the banks of the Thames and Gregory invites Syme to join them that evening, to prove that he (Gregory) is indeed a true blue anarchist.

At the meeting, Syme discovers that the group of seven are all code named by days of the week. Currently, the slot of Thursday is vacant and Gregory is a strong contender for the post. The rest of the story describes how Syme is drawn into the group and uncovers some of its deepest and most incredible secrets. The final conclusion is typical Chesterton – almost unbelievable and totally unexpected!

Orson Welles, who was one of Chesterton's most devoted fans directed the first radio adaptation of The Man Who was Thursday in 1938. Since then, the book has been adapted for radio readings and a film was also planned based on the book, though it wasn't made. The appeal of the book lies in its extremely readable style, exciting twists and turns of plot, memorable characters and the lyrical descriptions of Edwardian London.

For die-hard Chesterton fans, this would be a great new addition to their list, while those whose good fortune it is to encounter Chesterton for the first time in this novel will certainly enjoy the experience!

Fler avsnitt av The Man Who was Thursday by G. K. Chesterton

01 – The Two Poets of Saffron Park

02 – The Secret of Gabriel Syme