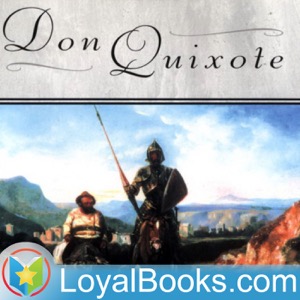 This is volume 1 of 2. One of the most quirky, eccentric and endearing heroes to ever be depicted in fiction, the chivalrous Don Quixote is sure to capture hearts while bringing tears of laughter to your eyes. If you've never encountered the Knight from La Mancha before, get set for a delightful sojourn through the Spanish countryside, across the fertile countryside of Central Spain. Don Quixote by Miguel de Cervantes Saavedra was an immediate success when it was first published in 1605 and won huge financial and literary success for its creator, an impoverished writer and poet.

Cervantes' own life was extremely eventful and colorful. The son of a poor army doctor, young Miguel enlisted in the army and fought in Turkey and Italy. He was captured by Algerian pirates and sold as a slave along with his brother and returned to Spain after three grueling years, when their ransom was finally paid.

His aim in writing Don Quixote was, according to his own notes, to describe the manners and mores of the time and to tell the story in a clear and simple way. The character of the tragicomic Knight was apparently based on one of Cervantes' own uncles who lived in the times of troubadours and knights errant.

The plot revolves round the elderly gentleman, Don Quixote who is fascinated by the ideas of chivalry and noble deeds he has read about in old books. He sets out with his trusted “squire” Sancho Panza, in reality a simple village yokel. The Don who traverses the land riding a decrepit old horse Rocinante, proceeds to fall into a series of misadventures, but still keeps his lofty ideals intact!

The more practical and earthy Sancho tries to bring his master down to earth, but to no avail. His master falls irrevocably and grandly in love with a peasant woman Dulcinea whom he imagines to be a damsel in distress. A series of zany incidents follow, with the Don slipping more and more into his imagined reality.

Regarded as the first prototype of the modern novel in Europe, Don Quixote is full of satire, humor, irony and wit. The character of the Man from La Mancha is both endearing and exasperating, while being one of the truly memorable figures in literature. The book appeals to young and old readers alike and is definitely a must read for its literary and humorous qualities.

A monthly reading and conversation with the New Yorker fiction editor Deborah Treisman.