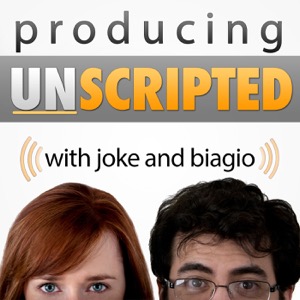 *Named "New and Noteworthy" across all podcasts, as well as TV & Film, Arts, and Education. Subscribe now.

Ready to create, pitch, and sell reality TV shows or documentary series and specials? From creating pitch tapes to meeting with TV networks, developing your ideas to discovering reality TV stars, this podcast features tips on working in unscripted film and television that you won't find anywhere else. Get top-industry secrets and even pitch your shows to Award-Winning Documentary Filmmakers and Unscripted Television Producers Joke Fincioen and Biagio Messina.

Recently, the duo have helped new producers bring projects to television on MTV, BIOGRAPHY CHANNEL, A&E, and CNN/HLN. Your show could be next. Subscribe now.

ABOUT JOKE AND BIAGIO: With over a decade of experience in unscripted film and television, this married couple has made TV shows, specials, and pilots for A&E, The CW, Biography Channel, NBC, CBS, Discovery, CNN, HLN, E!, IFC, Logo, Oxygen, Style Network, VH1 and MTV.

Their feature length documentary DYING TO DO LETTERMAN played in theaters across America, was invited by the International Documentary Association to qualify for Academy Award® consideration, and named “New and Noteworthy” on iTunes alongside The Dark Knight Rises, Brave, and Beasts of the Southern Wild.

Subscribers to this podcast will learn the secrets of the Unscripted TV and Film worlds, and how to apply them toward career success. Subscribe today.

Hiring in Hollywood: The Flipside

2020 Perspective for Filmmakers, Producers, and Creatives

Our Top 3 Scariest Moments on Set

Getting Engaged to Netflix

Create Great Titles for Your Projects: Tons of Tips…

The British Invaders podcast features a lively two-person exchange about different television series, tele-films and mini-series. These discussions serve as both an introduction and an entertaining conversation, catering to both those who have seen and those who have yet to see these British science fiction and fantasy shows. Each show is presented in two parts, with new episodes appearing every two weeks. British Invaders covers everything from story-lines to production details to spinoff material. Past topics have included Doctor Who, Sapphire and Steel, Red Dwarf, Day of the Triffids, Jekyll, Robin of Sherwood, and many more.

With topics that range from the captivatingly odd to the addictively entertaining, join hosts Eamonn Clarke and Brian Doob as they discuss British science fiction and related genres. Reach them directly at britishinvaders@gmail.com.

In summer 2013, get ready for more minion madness in Despicable Me 2. Chris Meledandri and his acclaimed filmmaking team create an all-new comedy adventure featuring the return of (former?) super-villain Gru (Steve Carell), his adorable girls, the unpredictably hilarious minions...and a host of new and outrageously funny characters.