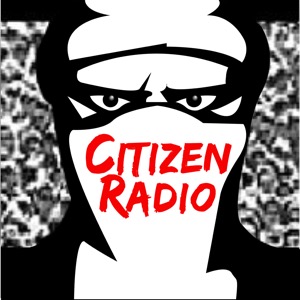 Citizen Radio is hosted by Allison Kilkenny and Jamie Kilstein and is dedicated to covering the stories that the mainstream, corporate media ignores.

It's like Democracy Now but with much more swearing.

“Jamie Kilstein and Allison Kilkenny have created an important political radio show that balances humor and unreported news. At a time when media conglomerates dominate the airwaves, independent media like Citizen Radio is vital to national discourse”

“Jamie Kilstein is amazing and I will be spreading the word. He has the spark that energized my conscience. We need more comedians kicking it hard the way he does every night” – Robin Williams

"Allison and Jamie are a modern day social justice, non-violent, vegan, punk, anti-war, feminist Bonnie and Clyde. Their weapons are simple: the pen, the airwaves, and a searing sense of humor. Their targets are the rich, the powerful, corporate media barons and basically any major league assholes."

“Jamie reminds me of why I got into comedy. It’s like watching a combination of George Carlin and Bill Hicks ”

(2018/03/15) Steve Bannon: "Let them call you racist...wear it as a badge of honor"; National Geographic confronts its racist past

(2018/03/11) GOP claims lots of women work in the White House—like Trump's wife and daughter; EPA aide granted permission to moonlight for private clients whose identities are being kept secret

(2018/03/07) Dems and GOP come together in the Senate to deregulate banks (again); Sam Nunberg's bizarre appearances on cable news

Who done it? Jackie Levitz was the heiress of the Levitz Furniture fortune, after her husband passed. Inheriting millions, she moved back to the state where she was raised as a simple farm girl. Mississippi. Weeks later, in the process of decorating her new home, Jackie vanished, leaving behind a blood-soaked bed, broken false fingernails and thrown-about fur coats. In an investigative true crime serial, dig into the mystery of a woman who certainly lived a life of luxury, and likely died a horrible death.

Our weekend programme comes live from Monocle’s radio studio in Zürich, where Tyler Brûlé and a panel of special-guest thought leaders discuss key topics in front of a studio audience.

911 Free Fall is the weekly podcast of Architects and Engineers for 911 Truth, the organization leading the charge to open a new investigation into the destruction of the three World Trade Center skyscrapers on 9/11. Each episode, we interview one of the many researchers and activists who are blowing the lid off the crime of the century.