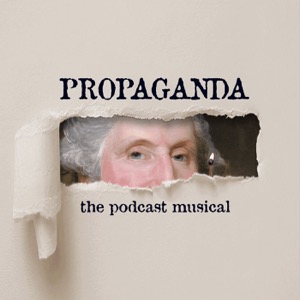 Rookie doesn't know much about his family business--but then again neither does the American Public. Nevertheless, he is tasked with suddenly leading the secret government agency in charge of covering up all political scandals, and his first assignment is the biggest scandal since watergate! With a clever idea, Rookie must come into his own and fight off the evil Agent X in order to save the bureau and protect the country from ruin! With a score teeming with energetic pop and jazzy elements, brought to life by a Tony Award winning - star studded cast, Propaganda the Podcast Musical is the antidote we need now.

Episode 5: The Button Heard Around the World

Episode 3: The Bureau and Broadway

Episode 2: The Song Inside

Episode 1: Not Your Normal Family Business

This is the story of one of those ships – the Oz 9 – and its tiny crew of hopeless incompetents. So far, they've been in space half an hour and several hundred people are dead. So... bright future, clearly.

Mystical truck drivers. Robots gone haywire. Killer clown demons. And pie. So. Much. Pie. This quirky, darkly comic, Southwestern-flavored anthology brings you a new paranormal audio play every month. Sit back, open your ears, and hold on tight. Because you're about to take a quick detour...through Uncanny County.

Salem's best source for late-night news, discussion, and information on all things magical, political, and supernatural.

King Falls AM centers on a lonely little mountain town's late-night AM talk radio show and its paranormal, peculiar happenings and inhabitants.

New shows available the 1st and 15th of every month! Be sure to start from Sammy's first show (May 1st, 2015) to stay up to date with all your King Falls favorites.

Dames & Dragons is a comedy D&D actual play podcast with a detailed original setting, lots of stupid jokes, a mystery or two, and some fumbling attempts at heroism. Join our cast of teen Guardians as they protect their Goddess from monsters, traps, social awkwardness, bread mold, and murderous ancient deities—among other things. Updates every other Monday! www.damesanddragons.com

President Bobbo Supreme is an infantile, narcissistic lounge singer, game show hosting,, narcoleptic racist; an unhinged id running for reelection and unwilling to cede power if he loses. The billionaire recording artist and leader of the free world is in the final push of his re-election campaign. Tortured by periodic dreams that range from glorious fantasies of his prowess as an athlete to nightmares of utter failure, President Supreme struggles to maintain a grip on reality. As the Election Day gets closer, chaos erupts throughout the country as right wing militias, aligned with the White House, clash with protestors.