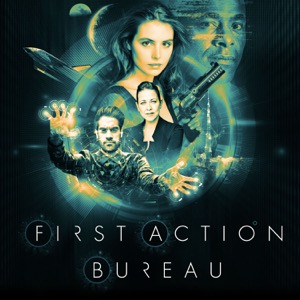 Series Summary: The First Action Bureau exists to protect the Earth - near-utopian by 2068 - from criminal elements before they get the chance to act. Using decades of ‘big data’ and globally connected quantum artificial intelligence, the Bureau is able to predict criminal activity before it occurs. Nero Jones may be the best agent the Bureau has, but something strange is going on. Headaches and bizarre dreams are troubling this deadly assassin, and as her missions continue it becomes increasingly clear that all is not well... not just with her, but with the Bureau itself. But where do the lies end? And where does the truth begin?

Series one is being released as an audio drama podcast consisting of 10x10’ episodes, hosted and supported by the team at Captivate.

Created and written by Jamie Anderson and Nicholas Briggs

In a gun-slinging, post apocalyptic future, a young man must make enemies of those he once called brothers.

Forced to leave his home and set out across the southern wastes to discover the truth of his father's betrayal, but above all he must fulfil his sacred duty to protect the mysterious Charge.

When a laboratory accident leads to electrocution and the accidental discovery of time travel, Doctor Petronella Sage, alongside her faithful friend and companion, Erasmus Savant, seizes the opportunity to make her mark in the annuls of history.

Envisioning the future is a daunting yet exciting task. Annalee Newitz profiles fascinating people considering the next century (or even the next millennium). Escape into the distant future to learn what’s coming.

Horror Movies will take you into the beyond, worlds of the unknown, to the outer limits of man thoughts and dreams. Horror Movies guarantee chills, trills and things that go bump in the night.

H2OME is a sci-fi story about how we managed to build a sustainable society.In a future where a few hundred people have sought shelter on Mars to escape the climate crisis, an expedition back to Earth 150 years later could shed light on the energy transition and reveal many secrets.What would we do if our backs were against the wall? What if our civilization was able to create a fully sustainable society, eliminating pollution and the other harmful effects of climate change?Find out with Joanna, a 30-year-old anthropologist from Mars, leading an investigation on Earth to answer these questions.H2OME is a 6-episode story by cH2ange (supported by Air Liquide). Listen to one episode each week!﻿Written and produced by Spintank, recorded at Entreprise studio FA, Paris, for cH2ange

Recall the harrowing accounts of a scientific team working at a remote underground research facility in the Scottish archipelagos.