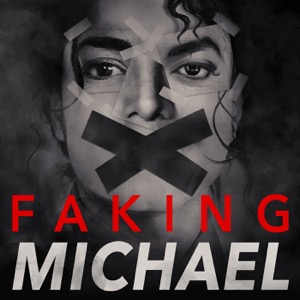 Faking Michael is an investigative podcast series chronicling one man's eight-year quest for the truth about a collection of 12 allegedly-fake Michael Jackson songs.

After first hearing the songs in 2010, journalist and Jackson fan Damien Shields - author of the book Michael Jackson: Songs & Stories From The Vault - embarked on a personal mission to find out once and for all where the songs had truly come from, and how three of them - "Breaking News," "Keep Your Head Up" and "Monster" - ended up on an official Michael Jackson album.

The songs, known as the Cascio tracks, were sold to Sony by Jackson's longtime friend, music producer Eddie Cascio, and his collaborative partner James Porte, in mid 2010 - a year after the singer's sudden death.

Upon hearing them, members of the Jackson family, a number of producers who worked with Michael throughout his career, and thousands of fans around the world accused Cascio and Porte of fraud, insisting that the songs were fakes - sung not by Jackson, but by an impersonator.

Undeterred by the controversy, Jackson's estate and record label insisted the vocals were authentic, officially attributing the Cascio tracks to the King of Pop when three of them were released by Epic Records on the Michael album in December 2010.

But strong doubts regarding the authenticity of the tracks remain.

Faking Michael draws on hundreds of hours of exclusive interviews, thousands of pages of correspondence and official records, and never-before-heard evidence that has lead to shocking breakthrough discoveries. Throughout the course of the podcast series, Shields details the findings of his investigation, putting the countless of pieces of this puzzle into place, and revealing the complete picture for the very first time.

The podcast focused on all facets of extreme metal, acting as a talk show / think tank for the genre. Only 3 episodes were recorded before the podcast was put on indefinite hiatus, but the plan to resurrect INTO THE DARKNESS is now in motion...

What you can expect?