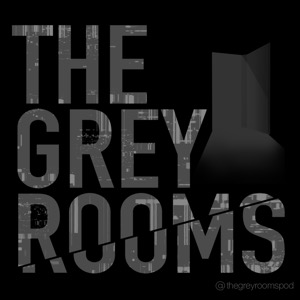 The Grey Rooms Podcast is a horror anthology set within a serial audio drama, where the main protagonist experiences death through the eyes of another person. Everyone dies at the end on this show, folks. It's scary stuff. And with over ~1.3 MILLION~ downloads, the show continues to deliver on its promise since day one; 5-star quality scares in an immersive audio environment. Join us for Season 4 beginning on November 26th, 2021.

Season 3 of the Grey Rooms features a man named Mr. Beckett. He arrives at a strange, sprawling manor house as the sun sets beyond the horizon. Within the walls of the Manor, Beckett finds that he's a figure of some importance, welcomed by the mysterious Management that owns the grounds. When he enters a room, however, he finds that he experiences the last moments of another person's life just before they die a horrific death. He awakens again and again on the grounds of the Manor, forced to live death after death... never able to save himself from the agony and terror of their end.

The Grey Rooms Podcast is brought to you by the following souls:

Shadows at the Door - Promotional

This Thing of Darkness

There’s a crack in reality and something’s breaking through. Ten mind-altering tales from some of the best new drama podcast writers.

The Violet Hour presents - THE GLOOM.

An investigative journalist uncovers clues surrounding a decades-old cold case, where she eventually learns the horrifying truth about a systemic cover-up tied to her own past.

Quinn has a dark secret only three other people know. All of them are missing.

Will is obsessed with true crime. She’s about to be at the epicenter of one.

Together, they attempt to unravel the mysteries of Averno- but they aren’t the only ones trying to find the truth. You, my dear listener, are the final piece of the puzzle. We’ve been waiting for you.

Welcome to a new world of immersive storytelling.

Live From Averno follows Will and Quinn, recent arrivals to the town, as they take a deep dive into the past of Averno and attempt to prevent any more disappearances.

Virginia Collins’s perfect life is disrupted when she falls for a handsome coach who promises to take her son's basketball skills to the next level. But as Virginia falls deeper in love, her family disapproves and they get entangled in a complex web of love, denial, abduction and ultimately death.

This is all about the English, Nepali and Hindi Poems I have written. If you are someone who is into poems, tune on to my podcast.