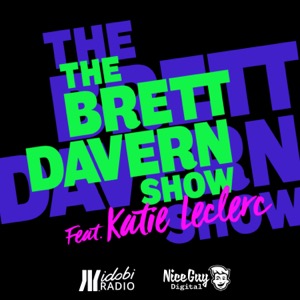 Actor Brett Davern, best known for his role on the MTV hit comedy Awkward, has teamed up with actress Katie Leclerc (Switched at Birth, The Big Bang Theory), and idobi Network president Tom Cheney to launch an all new morning show. The project, based on “The Brett Davern Show” podcast, is the first daily series from the leading digital radio streamer.

The aptly titled The Brett Davern Show is described as a morning blend of late night-styled talk, variety, and music. Davern and idobi Radio invite listeners to “turn up the volume on your morning” each weekday from 7AM to 8AM (PST).

“I’ve wanted my own radio show ever since I was a little kid,” says Davern. “One year I got a double cassette recorder with a microphone for Christmas and started doing radio: LIVE from My Bedroom. I had my family act as callers, I took song requests, read headlines, and even made up commercials—all for my (non existent) audience. I’m beyond excited to partner with idobi, it’s going to be a great time!”

idobi Network is ranked #8 overall among digital radio giants (Pandora, CBS Radio, iHeartMedia) with 7 million plus tune-ins each month; making the flagship station, idobi Radio, the premier alternative music and lifestyle destination on the internet. Known as an indie tastemaker that talks loud and has plenty to say, Cheney sees the collaboration between his network and Davern as a hit in the making: “From being blurbed in AMC on-air, to being quoted by TMZ, to shoutouts from stars like Seth Rogen and Dale Earnhardt Jr, to raucous originals, we’ve continued to expand as a multiplatform media brand. Partnering with Brett for a fresh take from a new industry is peak radio. Get ready.”

Leclerc, who met Davern on the set of their Sony Crackle original movie Party Boat, can be heard on air regularly and is also making sure the show is inclusive. All episodes stream live on idobi Radio (ido.bi/player) before releasing in podcast form later in the day on all podcast apps including the idobi app for IOS. There will also be a video version of each episode released on YouTube with closed captioning.

“Switched at Birth gave me a great opportunity to interact with the Deaf community and I wanted to find a way in which they could participate in this show too,” Leclerc says. “I’m excited that these YouTube episodes of The Brett Davern Show will create more inclusion for all.”

The Lord of the Amazon

Feast Of The Ass

Mammoth Film Festival Is Back!

What State Is Indianapolis?