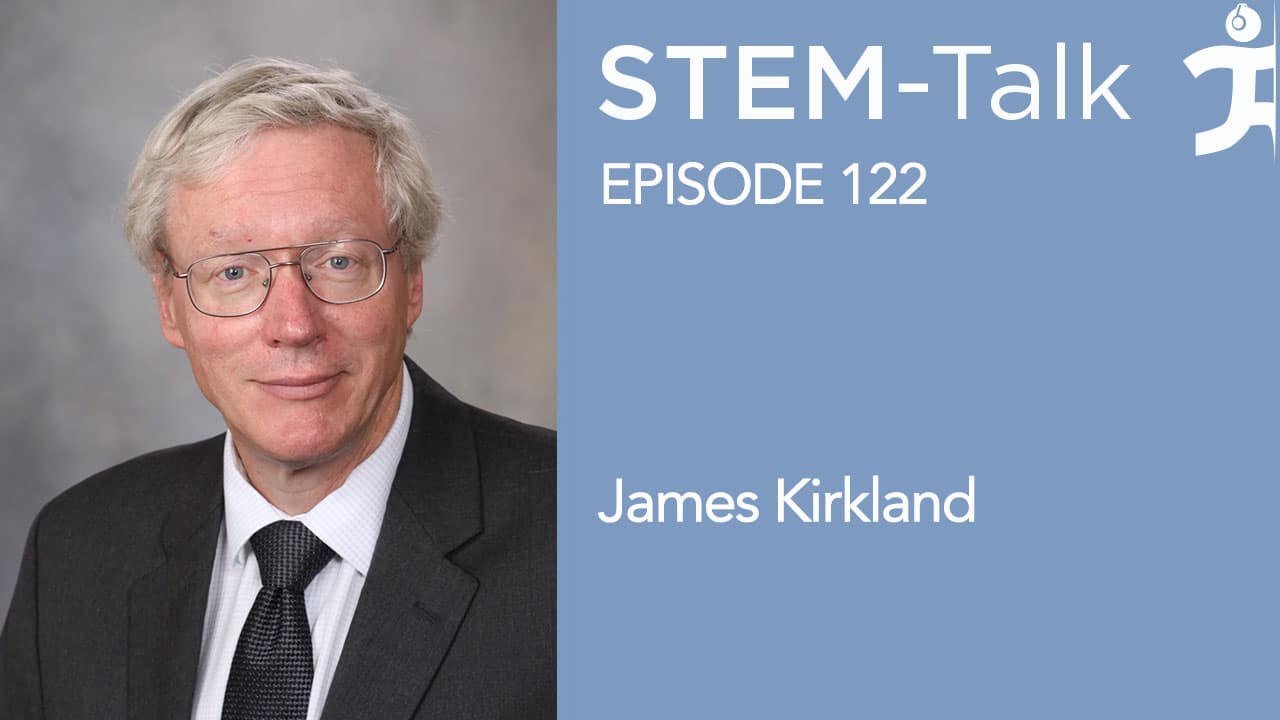 In today’s episode, we talk about zombie cells, a term used to describe senescent cells because of their refusal to die. Our guest on this topic is Dr. James Kirkland, a geriatrics specialist and researcher at the Mayo Clinic in Rochester, Minnesota, who is known for his research into the role that senescence and senescent cells have on age-related dysfunction and chronic disease.

As senescent cells build up in the body, they promote cellular aging and a host of chronic conditions related to aging, such as dementia, cancer, atherosclerosis, diabetes and arthritis. In today’s interview, we focus on Jim’s 2015 study where he and his colleagues at Mayo were the first to report on the potential of senolytic drugs to selectively kill zombie senescent cells. Jim’s paper in Aging Cell has been hailed as a major breakthrough in aging research.

Jim is the director of the Robert and Arlene Kogod Center of Aging at Mayo and the president of the American Federation for Aging Research. The goal of James’ lab and research is to develop methods to remove senescent cells to delay, prevent, alleviate or partially reverse age-related chronic diseases.  Jim and his colleagues believe that doing this will help extend people’s health span, and, more important, prolong the period of life where people can live free of disabilities caused by chronic disease.

00:03:20 Jim starts the interview talking about growing up in Canada.

00:03:31 Dawn asks him when he became interested in science.

00:04:05 Ken mentions that he understands that Jim had an interest in becoming a physician at a very early age, and given Jim’s previous comments, asks if it was Jim’s childhood observations of his grandparents’ aging that drove his interest in geriatrics.

00:04:51 Dawn mentions that Jim received his medical degree in 1977 and completed his residency at Toronto General Hospital. Dawn goes on to ask why, after this, did Jim decide to go overseas to study at the University of Manchester.

00:05:37 Dawn mentions that after Jim’s experience in Manchester, he moved back across the Atlantic to work at the National Institutes of Health (NIH), where he mainly studied adipose tissue.

00:07:19 Dawn mentions that in 2007 Jim became the director of the Kogod Center on Aging at the Mayo Clinic and asks how Jim ended up at that position.

00:07:54 Dawn asks Jim to clarify the difference between lifespan and healthspan.

00:09:26 Ken mentions that Jim’s research throughout his career has focused on cellular aging and senescent cells. Ken asks what initially triggered Jim’s interest in senescence.

00:11:42 Dawn mentions Jim’s 2015 paper in Aging Cell, where Jim and his colleagues at the Mayo Clinic were the first to report on the potential of senolytic drugs, which selectively kill senescent cells. Dawn goes on to ask Jim about his research leading up to this breakthrough paper.

00:14:47 Dawn asks Jim to talk about two senolytic compounds that he and his colleagues identified called dasatinid and quercetin, and what the significance of their discovery is.

00:17:20 Ken mentions the senolytic agent called fisetin, which is another agent showing benefit in rodent studies and is now being used in human clinical trials. Ken mentions that some authors have described fisetin as having roughly twice the senolytic potency as quercetin. Ken asks Jim to explain where fisetin fits into the senolytic landscape.