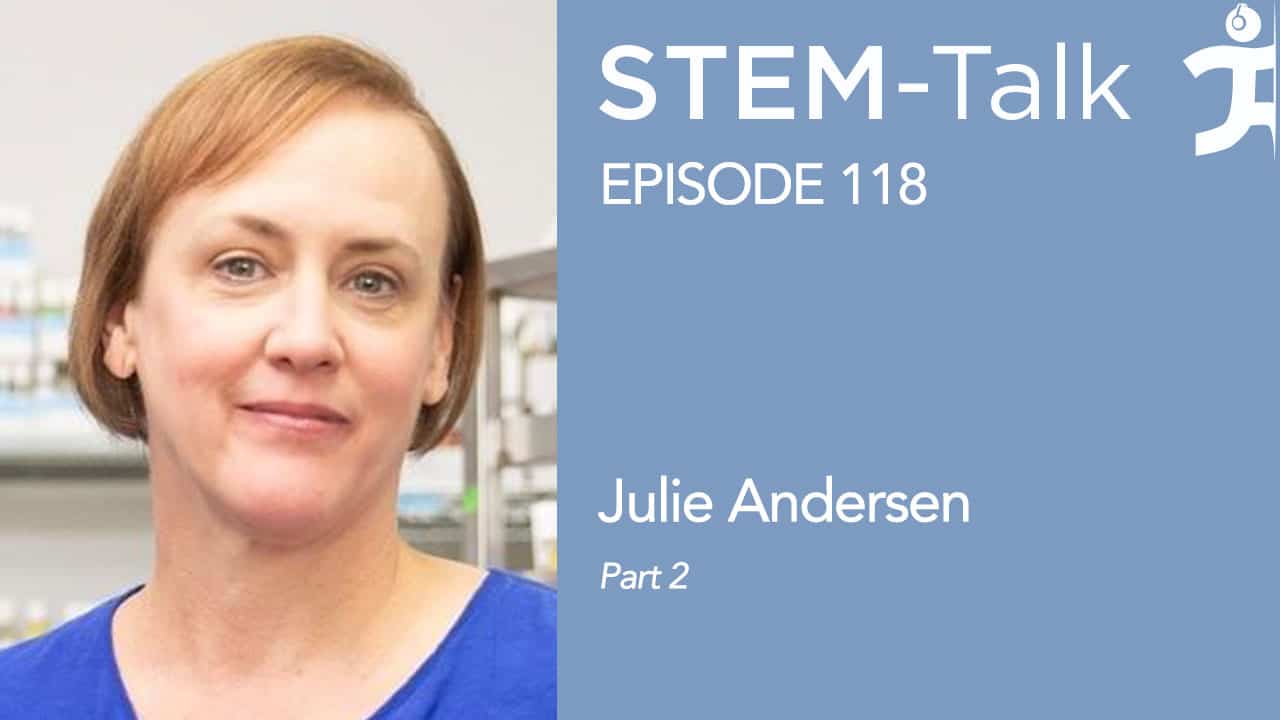 Today we have part two of our conversation with Dr. Julie Andersen, a professor at the Buck Institute who is conducting fascinating research into the metabolite compound urolithin-A.

Laboratory experiments have demonstrated urolithin-A’s ability to induce mitophagy, which is a selective recycling of mitochondria by autophagy, a process that cleans defective mitochondria and becomes less efficient during aging. Julie’s research has focused on the potential of urolithin-A to prevent and treat such diseases such as Alzheimer’s, Parkinson’s, Huntington’s and Lou Gehrig’s disease.

In part one of our interview with Julie, she talked about her interest in aging and age-related diseases as well as her early studies into developing new therapeutics for neurodegeneration.

Julie has been with the Buck Institute since 2000 and has published more than 170 papers.

00:02:15 Dawn starts the second part of our interview asking Julie how the composition of bacteria in the gut affects brain function.

00:07:08 Ken asks Julie to explain what urolithin-A is, where it comes from, and why her lab and others are so interested in it.

00:10:49 Ken mentions that a study was recently published which showed that giving urolithin-A to older mice resulted in a 42 percent improvement in endurance while running compared to a control group of mice of the same age. Ken goes on to ask Julie what it is that makes urolithin-A so impactful.

00:12:43 Dawn mentions that it is known that production of urolithin-A seems to be dependent on the presence of certain gut microbes. She goes on to ask Julie what types of gut microbes are most important in the conversion of ellagic acid.

00:13:33 Ken asks if people vary in terms of how efficiently they convert ellagic acid into urolithin-A, and if so, how much variance is there.

00:14:43 Julie explains what she has learned about how to better analyze the gut microbiome composition from her studies with mice.

00:16:19 Ken mentions the June 2019 paper by Chris Rinsch’s team in Nature Metabolismwhich showed a striking up-regulation of mitochondrial gene expression, including some induction of mitophagy genes in the skeletal muscle of older adults after 4 weeks of oral urolithin-A supplementation. He goes on to say that given the well-documented mitochondrial dysfunction in Parkinson’s disease, which seems to be ubiquitous, he asks what Julie’s thoughts are on the use of urolithin-A supplementation in Alzheimer’s or Parkinson’s

00:19:22 Dawn mentions that Julie wrote a paper titled “Senescence as an Amyloid Cascade: The Amyloid Senescence Hypothesis,” about the intersection of amyloid-beta oligomers and cellular senescence in Alzheimer’s disease, cautioning against completely rejecting the amyloid hypothesis. Dawn asks if the intersection of senescence with amyloid burden help to address the lack of correlation between amyloid burden and disease burden in both animal models and humans.

00:26:22 Dawn asks about the compound “C1” that Julie’s lab has demonstrated boosts autophagy and, as a result, shows promise in treating Alzheimer’s.

00:30:27 Dawn mentions Mitopure, which is a commercially available oral formulation of urolithin-A from a Swiss company called Am...