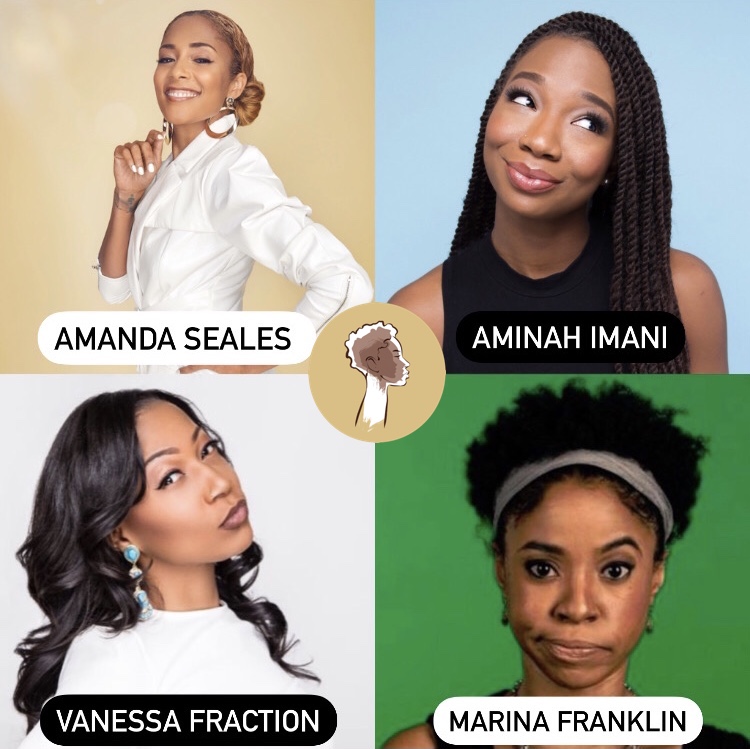 Amanda Seales is a comedian and creative visionary. You know her as, “Tiffany DuBois” of HBO’s Insecure and her debut stand up special, “I Be Knowin”.  She is a former cohost on daytime talk show, “The Real”, host of NBCs “Bring the Funny,” and hosted the groundbreaking 2020 BET Awards. She is the creator/host of the hella successful touring and now virtual, variety game show, “Smart Funny & Black” owner of its namesake Smart Funny & Black Entertainment, and recently launched the membership community app, “SFB Society” which through vibes, jokes, and facts provides a safe space for folks to be their whole black selves. A Jedi Khaleesi with a patronus that’s a Black Panther with wings, Amanda Seales continues to keep audiences laughing, thinking, and living in their truth!

Vanessa Fraction Born in St. Louis and raised in Chicago, this mother of two has over a decade of experience captivating fans around the world with her one of a kind storytelling talent. Whether you see her on stage, television or hear her on the radio, Vanessa is on a mission to empower her audience to overcome their struggles while laughing at hers. These can be hilarious tales of being a single mother paying child support or revealing anecdotes on the battle of being a strong, successful black woman. Her television credits include appearances on Comedy Knock Out and Laff Mobb’s Laff Tracks (TruTV), Tales (BET), and a  recurring role on BounceTV’s Mann and Wife. Vanessa’s hilarious and bold stand-up comedy has been showcased on many shows such as HBO’s Def Comedy Jam, 1st Amendment Standup (STARZ) and Mike Epps Live at Club Nokia. As a writer she has worked on The Arsenio Hall Show (CBS), 106 & Park and The Mo’Nique Show (BET). Her film roles include Barber Shop 2: Back in Business and Kim Field’s Holiday Love: The Rebirth. Her quick wit and sharp humor is featured when she guests hosts on entertainment shows like DishNation (FOX) When you "do the math" Vanessa Fraction equals One Very Funny Lady! More info at www.vanessafraction.com