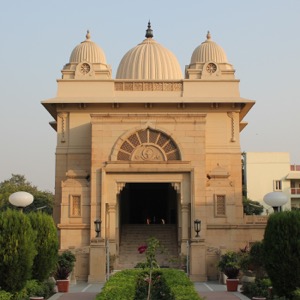 The programme began with singing of Bhajans (Bhavasagar o….) led by Swami Dhruvarupanandaji accompanied by Sh. Bishnumurari Chattopadhyay, Br. Ujjwal and Sh. Siddhartha Bhattacharya on tabla. This was followed by a meditation session conducted by Revered Secretary Maharaj Swami Shantatmanandaji, and then Puja conducted by Swami Amritamayanandaji (Pujari Maharaj).

Following this, Sri Ramakrishna Namarchana was performed by Swami Tadbhasanandaji Maharaj with 108 sacred names of Sri Thakur spelt out by him. All this was done in the Vivekananda Hall itself.

After Namarchana was over, Revered Secretary Maharaj-ji welcomed the speakers and all others who had come to participate in the Bhakta Sammelan. At the end of the welcome address, Swami Sukhanandaji Maharaj spoke on the subject.

The Gita chanting led by Swami Dhruvarupanandaji Maharaj. After the Gita chanting, Revered Swami Vimalatmanandaji spoke on the subject. Then there was chanting of “Bhajagovindam” by all led by Swami Dhruvarupanandaji and accompanied by Br. Nirbhay, Br. Baswaraja, Sh. Bishnumurari Chattopadhyay on manjira and Shri Siddhartha Bhattacharya on tabla. Later Revered Swami Shantatmanandaji Maharaj spoke on the subject.

After the speeches were over, the devotees attended Aratrikam in the Vivekananda hall itself led by Swami Amritamayanandaji Maharaj. ”Khandanabhava bandhana…… “ was led by Swami Dhruvarupanandaji accompanied by Br. Nirbhay, Br. Baswaraja, Br. Ujjwal, Sh. Bishnumurari Chattopadhyay, Sh. Madhumurari Chatterjee on sitar, and Sh. Siddhartha Bhattacharya on tabla.

After Aratrikam all the delegates were served lunch, prepared in the Ashram by volunteers and staff.

At the end, all the delegates were served with tea and snacks. Thus the Bhakta Sammelan came to a successful conclusion at 4:30 pm.

Video recordings of the lectures:

Audio recording of the lectures: