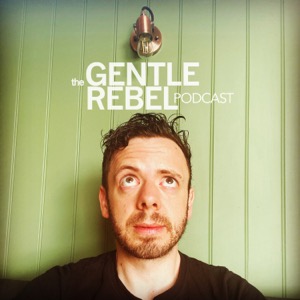 Like many of us, Chris Brock has spent a lot of his life trying to work out what he was 'supposed to do' with it. He followed the expected path through life, pursuing what he had thought he ought to.

But there was a creeping dread, underpinned by a drift towards places he never set out to go. Places he wouldn't have chosen. And his life became haunted by questions we may recognise..."Where have I gone wrong? What have I DONE wrong?"

During a particularly low period Chris' wife made an observation, which stirred something deep inside him. "Every time we go out I feel like I have to cheer you up".

Something clicked for Chris. He realised he didn't want to be like that with those he loved. And he started to explore the possibility that life didn't HAVE to be like that.

So alongside his wife, Chris took gentle steps inwards, where he became aware of his self-narrative. And through this period of deep introspection he found practices that helped him gradually return to his core sense of being.

It was not easy, but instead of continuing to run or hide from them, Chris turned to face his inner roadblocks and demons. Over time they began to crumble and allow him to see beyond them.

He shifted from feeling like an observing subject of his life, to the person in the driving seat. And he felt more integrated and connected to what was actually meaningful. Rather than following the scent of all he had been told he was supposed to find meaningful.

The Red Flag of Resentment

Resentment develops when it feels like the world is conspiring against us. Chris talks about developing resentment awareness.

Resentment becomes a self-fuelling emotion because when it fuels our interactions we ill-treat people, and they react badly.

He had noticed himself creating more of a world worth resenting by mistreating people he believed possessed what he deserved. He operated from a place of scarcity and shame. And from that he built a reality that gave him more reason to feel those things.

The Flow of the Junction

Where do you recognise resentment showing up for you?

Chris noticed it when he was driving. Through the stories he would tell himself about those driving nicer cars than him. He would actively avoid letting such drivers out of junctions. Potentially provoking the kind of angry reaction that would reinforce the story that people like them don't deserve the things they have.

When resentment prompts us to stop letting people out at the proverbial junctions of life, we block deeper part of ourselves from growing.

If we choose to let our resentment dictate our action, we turn off the tap that allows our expansive creative energy to flow through the core of our being.

This is damaging to us as individuals, and can have a cascading impact on society.

Unfortunately however, resentment is the fuel on which a lot of modern society runs. It drives us to accumulate, to envy, to fear, to embrace scarcity, urgency, and distrust. It drives us to feel like we are on the receiving end of injustice and unfairness, and that other people are getting the things to which we are more entitled.

Sonder was a term coined by John Koenig on The Dictionary of Obscure Sorrows.

It puts a name to the realisation that each random passer-by is living a life as vivid and complex as our own. Everyone has a subjective experience of the world,