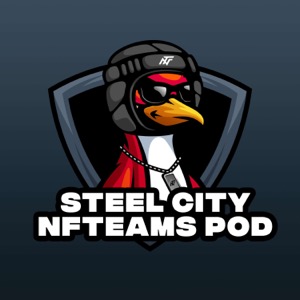 Return from the Squid Games / The Staniel

Welcome back to the Steel City NFTeams Pod! Nik, Ace and B have returned from their Squid Games hiatus and are ready to roll in this latest dig from the Podquarters with their Season 4 opening innings! That's right - Season 4. Season 3 was short but high, high quality... Well, short anyway. In this huge (and let's be honest, rusty) return, the boys cover a stack of content in 'Around the Grounds' such as the May Tournament, original T2 winner (enter Staniel) and give out another Gold Shield Award. Prior to this, though, they open the show with a brand new, shiny, expensive, neutral (that's a clue, folks) NFTeams Heartland and a quick Focus Team of the Week with a dark history (welcome back, Staniel).  There were about a thousand shout outs in this pod, but here's just a few of them to give you an idea of how varied (disorganised) this episode was: Kevy, Steve Smith, DaColonel, Fortachewed, Red Runner, Roger Federer, "The Research Department", A. Murphy, Russell Coight, Gurt Remington and Aussie actor Peter Phelps. Makes perfect sense, right? It should be noted that the team discovered the "beep" sound button when editing the pod, so that gets the nod to debut this week. It should also be noted that if it sounds as if Ace and Nik are eating while they speak occasionally, it's because they are. They had Chicko's while recording but just forgot to tell everyone at the start. They also forgot to do a shot of whisky before hitting record. Amateurs... Keep an ear out for the "Alderon Challenge" gauntlet being thrown out midway through the pod. Some lucky listener, probably named Alderon, is going to win a brand new, black, size L Prying Drop Bears polo shirt. Congrats Alderon on the (most likely) win. Apologies for the audio quality dropping out at times. It turns out that Hawaiian burger mayo on the tech equipment is not a good thing. Enjoy!P.S. The new intro song got another run today at the start of the episode. The original song is at the tail end of things. If you have a preference for one over the other, let us know about it on Twitter or in the Discrod! *** Presented by SteelCityNFTeam and  ESPNFTeams on Twitter ****** Also presented by (insert chicken restaurant here... one day...) ***You can learn more about our newest NFTeams Heartland, Zurich, here.  To learn more about NFTeams and how you can get involved, check out the website, official Twitter account, @nfteams_ and the discord!To hear from Steve (the creator of NFTeams), follow his Twitter account @day25 here or his blog Daily25 here.Check out the NFT Sports Radio podcast with Coo here. He is the OG of NFTeams podcasting and you will love his work! Here's a link to the NFT Sports Radio website, too.To protect your NFTeams and crypto with a hardware wallet, visit one of the official sites via the links below (that ironically, we "stole" from Coo!):Ledger store - hereTrezor store - hereTo hear more from Nik, check out his Twitter here.To hear more from B, check out his Twitter here.Music from Uppbeat (free for Creators!):https://uppbeat.io/t/soundroll/that-vibeLicense code: QPC2QY297WFVHV5Z

Fler avsnitt av Return from the Squid Games / The Staniel

The Day Our Bum Went Psycho

THE Jersey Pod - with Steve and Kevy!

NFTeams in a Nutshell (refer a friend!)

Return from the Squid Games / The Staniel