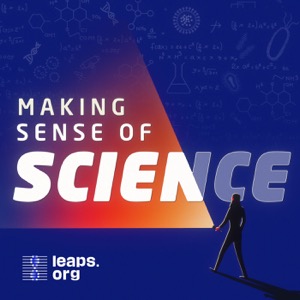 Today's guest is Percy Griffin, director of scientific engagement for the Alzheimer’s Association, a nonprofit that’s focused on speeding up research, detecting Alzheimer’s earlier and other risk reduction measures. Percy has a doctorate in molecular cell biology from Washington University. He’s led important research on Alzheimer’s, and he's a gifted science communicator. His bio is linked in the show notes, below.The topic of our conversation is the present and future of the fight against dementia. Billions of dollars have been spent by the National Institutes of Health and biotechs to research new treatments for Alzheimer's and other forms of dementia, but so far there's little to show for it. Last year, Aduhelm became the first drug to be approved by the FDA for Alzheimer’s in 20 years, but there have been red flags about its effectiveness, side effects and cost.

Show notes:4:40 - What led Percy to concentrate on working in this important area.

6:20 - Defining Alzheimer's, dementia, and the key elements of communicating science.10:20 - Why the Alzheimer’s Association has supported Aduhelm.

17:58 - Reason to be excited about therapeutics under development and how they could be tailored to a person's unique biology.

24:25 - Tradeoffs between investing more money into Alzheimer’s research compared to other intractable diseases like cancer, and new opportunities to accelerate progress, such as President Biden's ARPA-H proposal.

27:24 - The social determinants of health. The pros/cons of continuing to spend billions to develop new drugs versus expanding policies for better education, nutritious food and safe drinking water that have enabled some groups more than others to enjoy improved cognition late in life.

42:34 - Tests to check brain health today, and which biomarkers we're making progress on.

47:25 - Important programs run by the Alzheimer’s Association to support advances.

Check out this conversation if you’re concerned about your brain health, that of family members getting older, or if you’re just concerned about the future of the country with experts predicting the number people over 65 will increase dramatically in the very near future.**After this episode was recorded, the Centers for Medicare and Medicaid Services affirmed its decision to limit coverage of Aduhelm.

Show links - Percy Griffin's bio- The Alzheimer's Association's Part the Cloud program- The paradox of dementia rates decreasing- The argument for focusing more resources on improving institutions and social processes for brain health- Recent research on napping- The Alzheimer's Association helpline- ALZConnected, a free online community for people affected by dementia - TrialMatch for people with dementia and healthy volunteers to find clinical trials for Alzheimer's and other de

How to Live With and Love Bugs with Jessica Ware

Living to Age 150 with Steven Austad

Should Scientific Controversies Be Silenced, with Dr. Amesh Adalja

All about Paxlovid, the new anti-Covid pill, with Pfizer's Head of Medicine Design