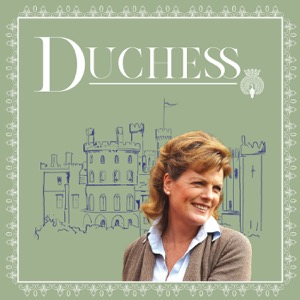 Listen in as the Duchess meets Claire Watson-Armstrong of the magnificent Bamburgh Castle. In this epsiode, we learn why Bamburgh is considered one of the greatest archeological sites in Great Britain, we are introduced to the many ghosts that are said to still walk castle halls, and Claire explains why Bamburgh Castle has been a centre for innovation.

“I love the interiors of Bamburgh Castle. Bits of the castle are Norman, are victorian, are more modern. But its all a collection of different eras - a wonderful potpurri.” - Claire Watson-Armstrong

“I would love to bring recognition to this castle and tell the story of the people who made it what it is. If I could do that - I would be very happy.” - Claire Watson-Armstrong

“My advice to the generations ahead would be to carve your own path, be respectful, and don’t procrastinate.” - Claire Watson-Armstrong

About the Guest and Stately Home:

Claire Watson-Armstrong is the current custodian of Bamburgh Castle along with her husband Francis. Francis Armstrong is the 5th generation of Armstrongs to reside at Bamburgh - the estate having come under the family’s stewardship since it was purchased by William, 1st Baron Armstrong in 1984. Mrs. Watson-Armstrong and her husband have been together for 18 years and married in 2020. Claire is also a PR Consultant with her own company ‘Impact PR and Marketing’ which she founded in 2006.

Bamburgh Castle’s earliest recorded history begins around 547AD with the Anglo Saxon Kings. The original stronghold of Bamburgh Castle was built by Ida the Flamebearer. In 1095, William the Conquerer’s son, Rufus, erected the mighty keep. For several centuries Bamburgh was owned by a number of kings; Henry III, Edward I, Edward II, Edward III. Bamburgh was also home to Henry VI during the War of the Roses. Eventually the castle went into private ownership and would become a centre for innovation and philanthropy. The first coastguard system was developed there by Dr. John Sharp, with the first lifeboat launched from the coast. The industrialist and inventor Lord Armstrong would eventually purchase the castle and conducted significant restoration of the castle.

Emma Rutland, The Duchess of Rutland, did not always stride the halls of stately homes. Born Emma Watkins, the Duchess grew up the daughter of a Quaker farmer, in the Welsh marsh countryside. She trained as an opera singer in the Guildhall School of Music, and worked as a successful interior designer before meeting her future husband David Manners, the 11th Duke of Rutland, at a dinner party. Their marriage in 1992 would transform Emma Watkins into the 11th Duchess of Rutland, thrusting her into the world of aristocracy, and handing her the responsibility of one of the nation's great treasures: Belvoir Castle. While simultaneously running the day to day operations of the castle, and raising five children, The Duchess became fascinated with the history and importance of the other stately homes of the UK. Join The Duchess as she embarks on a wonderful journey through time, to learn more about the incredible homes that have defined Great Britain and, most importantly, meet the other extraordinary women who work tirelessly behind their doors to preserve their history and magic for future generations.

The Marchioness Townshend of Raynham Hall