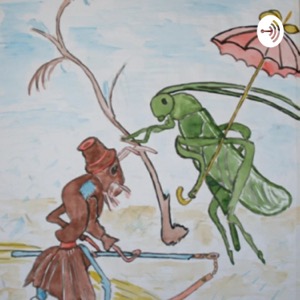 The Ant and the Grasshopper

Long time ago all the birds could talk like people. Most of all the birds, people liked the talkative parrot be­cause this honest bird always told the truth.

«Is that the truth? Let’s ask the parrot, because he always tells the truth.»

«Yes, he did. This dishonest cruel man killed the cow,» answered the parrot.

When night came, the man had an idea. He put a great cup on the parrot’s head. Then he poured a lot of water on the cup.

In the morning his friend and some other people came to his house again.

«I know that this dishonest cruel man killed my cow. The parrot says that he did.»

«You are wrong! That parrot tells lies. He will not tell the truth even about what happened last night. Ask him if there was the moon in the sky yesterday.»

«No,» said the parrot. «There was no moon, it was raining all night.»

«It is impossible! This bird tells lies! What shall we do?» the people said. «Fly away! You can’t live with us!»

So the parrot flew away unhappily into the forest where he met a mocking-bird (пересмешник) and told him his story.

«Why did you not repeat words as I do?» asked the mocking-bird. «Men always think their words are clever.»

«But the man told lies and he was not intelligent,» said the parrot.

«That is nothing,» answered the mocking-bird. «Say what they say, and they will think you are a wonderful and polite bird.»

«Yes, I see,» said the parrot, «from now on, I will only repeat their words.»

The Tortoise and the Hare

The Fox and the Crow

The Wolf in Sheep's Clothing

The Wind and the Sun

The Fox and The Crane

It is about sweety bun