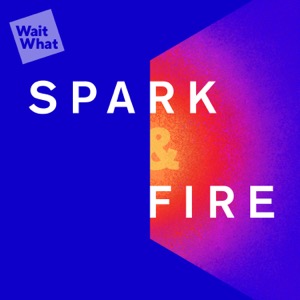 Creativity. It’s as mysterious and elusive to humans as love. We stalk it. We crave it. We try to bring it out in ourselves.

Every creative work you’ve ever loved has a hero’s journey behind it. Whether it’s a book or a building. A movie, a mural, a musical. It starts with a spark. Then: Endless iteration. Inevitable setbacks. Magical people who appear to help. And the breakthrough idea — that takes on a life all its own.

On Spark & Fire, for the first time ever, you’ll hear what was happening in the mind of a creator as they brought their iconic work to life. But this isn’t an interview show. It’s a story — told entirely in the artist's own words — against the backdrop of originally composed music of the prepared piano.

In Season One, you’ll hear from Yo-Yo Ma on the Silk Road Project, director Rian Johnson on making Knives Out, Isabel Allende on The House of the Spirits, Kemp Powers on Pixar’s Soul, architect Thomas Heatherwick on The Vessel, choreographer Bill T. Jones on Afterwardsness, book designer Chip Kidd on the cover of Jurassic Park, executive producer Kamilah Forbes of the Apollo Theatre, Susan Orlean on The Orchid Thief and more.

With host June Cohen — cofounder of WaitWhat, former executive producer of TED Talks and co-host of the TED conference — in her first hosting role since TED.

What really happens on the road to success? You’re about to find out. Let these epic stories spark your own creative journey.

Spark & Fire is a WaitWhat original series in exclusive partnership with Skillshare.

Episode 5 of Spark & Fire, "Turn crisis into art: Tony-winner Bill T. Jones on Afterwardsness, his pandemic masterpiece," has been nominated for a 2021 Webby Award as one of the five best individual podcast episodes produced in the past 12 months.

Be utterly honest: Ben Folds on his breakout album “Whatever and Ever Amen”

How to spark others: Yo-Yo Ma on the Silk Road Project

Stick with it: "The Queen's Gambit" producers Allan Scott and Bill Horberg

Stay authentic to yourself: Randall Park on making "Always Be My Maybe"

Create the conditions for your own creativity: Yaa Gyasi on "Transcendent Kingdom"

Play to an elevated purpose: Wynton Marsalis on "The Democracy! Suite"

Oscar winner Pixar's Kemp Powers on "Soul": The best person for the project

How to build your creative vision: Photographer Stephen Wilkes on the 2021 Inauguration Photo

Coffee and a Mike

I want people to find my podcast humorous, informative, and most important fun. To provide a short escape for people to check out of their busy life. With thoughts in my mind I hope that people stay in their car a little longer, get a few more minutes of working out or delay taking a lunch break from work to hear my next thought or idea.

Hannah Mooney has your ticket to arts happenings in the Tron and beyond. Interviews with local creatives, what’s on guides and even the odd performance live on air...

Ask a Matchmaker is your weekly go-to podcast for all things love and relationships. Hosted by fourth generation matchmaker and founder of Agape Match, Maria Avgitidis, Ask a Matchmaker gives you no-nonsense insight into dating, relationships, compatibility, and love. Maria and her weekly special guest answer questions to help you venture through the jungle that is modern love. Whether you're looking for someone or you're happily taken, Maria will keep you inspired to keep going down the path of love every week, and hopefully gain a great tip or two to ignite the spark or keep the sparks flying!