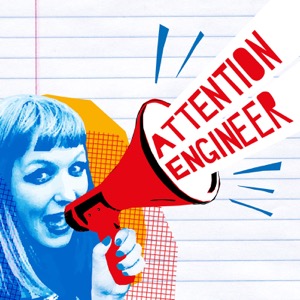 Content warning: two brief mentions of suicide, in the context of having lost friends.

Thanks for listening! Attention Engineer is a show where I seek to make the best use of my own valuable time and attention by having deep conversations with fellow artists about creativity, grit and determination. My aim is to consistently remind you - and remind myself - that creativity really is for everyone….because it really is. Let’s kick that inner critic where it hurts!

About my guest: Shingai Shoniwa is the legendary front woman and bassist from the Noisettes. Dubbed “The new afrofuturist pop goddess” by Rolling Stone, her debut solo album “Too Bold” was released in October 2020 and marks a new chapter of her journey. This sonic odyssey through an effervescent soundscape fearlessly infused with a soulful yet spontaneous spirit is the sound inspired by Shingai’s London, Bantu and Zimbabwean heritage.

In this episode, we discuss making music that’s a movement, too, the importance of creativity in a happy household, and how music helped Shingai navigate a childhood packed with grief, stepping off the major label conveyor belt and making music against the odds as an independent artist with integrity and the detrimental effect of social media and influencer culture on everyday creativity.

About your host: I'm Laura Kidd, a music producer and solo artist releasing music as Penfriend. Come and grab two free songs plus letters about art and music from http://penfriend.rocks/hello.

My new album “Exotic Monsters” is out now: http://penfriend.rocks/exoticmonsters

If you enjoyed this episode, I think you'll enjoy:

Til next time xo

Ep50: Matthew Caws (Nada Surf) on giving yourself permission to be creative

Ep48: Rou Reynolds (Enter Shikari) on wielding music as a tool of unity

Ep47: Miki Berenyi (Piroshka / Lush) on celebrating a breadth of voices in music

Ep46: Ginger Wildheart on creating a you-sized shape in the world of music

Ep45: Mary Spender on finding a smarter route to a full-time music career and building a huge fanbase on YouTube

Ep43: Lou Barlow (Sebadoh / Dinosaur Jr / The Folk Implosion) on building a body of work...however the f*** he wants to