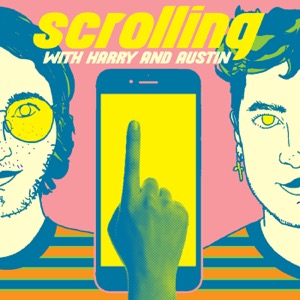 On this week’s episode of Scrolling, Harry and Austin celebrate the 15th anniversary of Hannah Montana, walk through some recent celebrity burglaries, and discuss Lil Nas X’s latest controversial music video. Plus, so much more! ALSO- we got new mics! Cheers to sounding like NPR!

:30 Should Harry start dropshipping or become an Etsy sticker girl? That and other capitalistic thoughts!

2:28 Austin cuts off all of his hair! The HAIM sisters are reportedly devastated

14:20 Do you think Emma Watson yelled at Daniel Radcliffe for being drunk while filming Harry Potter?

23:37 Lil Nas X’s descends into hell in the Montero (Call Me By Your Name) music video ft a cameo by Effie Trinket

27:11 Beyonce and Shawn Mendes were both robbed this week in LA. Alexis Neiers has been reached for comment.

36:26 Sweet niblets! It’s been 15 years of Hannah Montana! Harry and Austin reminisce on growing up with HM

41:50 The boys speak on past Disney Channel Original Programming and why they’re not Nick or Cartoon Network kids

45:46 Harry and Austin pick their top thee Hannah songs and examine the lyrics. And by examine we mean sing!

1:00:40 Breaking down the hotties of Hannah Montana: Billy Ray, Jake Ryan, and Jason Earles of course!

For extended ad-free episodes and exclusive content, support us on Patreon: patreon.com/scrollingpod

Listen to Harry and Austin's Most Played Songs Here! https://tinyurl.com/scrollingsspotifywrapped

52. "Bottom of the Cracker Barrel"