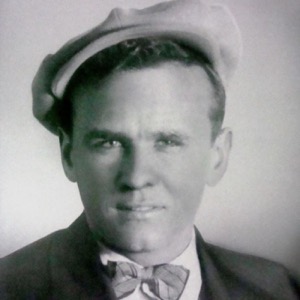 William Branham (1907-1965) was a Pentecostal minister from Jeffersonville, Indiana credited by some as initiating the Post WWII Healing Revival. The first of ten children of Charles and Ella Branham, Branham claimed to have been born in Cumberland County, KY and reared in the booming Southern Indiana casino town directly across the river from Louisville, KY. He was also a "doomsday Prophet", predicting several years that he claimed to be the End of Days.

Branham was introduced into the Pentecostal faith by Roy E. Davis. Davis was at one time an official spokesperson for William Joseph Simmons' 1915 revival of the Ku Klux Klan, as well as the official spokesperson. He was also affiliated with other white supremacy groups Simmons created such as the "Knights Of The Flaming Sword." According to William Branham, Davis was his mentor, the one who baptized him, imparted the "Holy Ghost," and appointed him as a minister. Shortly after, Davis was extradited by the Governor of the State of Indiana to Hot Springs, Arkansas on charges of grand theft and connection to murder. William Branham seized the opportunity, taking control of Davis' rowdy church and forming the Billie Branham Pentecostal Tabernacle in 1936.

In 1944, Roy E. Davis was involved in a swindling scheme with Congressman William D. Upshaw. After, Davis introduced Upshaw to William Branham. A year later, in 1945, William Branham began his evangelistic "healing" ministry, and Upshaw (who had witnessed been physically running since 1936) entered one of Branham's meetings as an "invalid" in a wheelchair. When Upshaw was "healed" from his "bedridden" condition, Branham's fame in the Faith Healing business quickly spread.

By 1947, William Branham had embellished many events of his "life story," removing the details that would raise skepticism and adding "supernatural" aspects. He started claiming to have had several conflicting "commissions" by God, and introduced a tragic but partially fictional story of his life. Over time, his Stage Persona began to include stories of being born under a supernatural sign, having a prophetic gift as a toddler, fatherless at an early age, and more. Even the tragic death of his wife was embellished to become part of the story. Before long, William and his brother Howard Branham, who ran a Jeffersonville nightclub, started touring the country to participate in the "healing revival". His new Stage Persona, combined with Upshaw's "healing," was very powerful in lifting Branham to the top of the revival. He had a very successful series of meetings throughout parts of the United States and Canada.

During the birth of the Civil Rights movement, Branham began leaning back towards his Ku Klux Klan roots. He began claiming that Martin Luther King was "communistic inspired," African Americans should "forfeit their rights" and be "satisfied in the state [they are] in," and that "hybreeding" (interracial marriage) was an unpardonable sin. But he continued the "Elijah" claims as well, eventually convincing his listeners that the "Elijah of this day" [himself] was the return of Jesus Christ. After Branham's Death in 1965, the Federal Bureau of Investigation's query into the Kennedy Assassination exposed the fact that Roy E. Davis was in fact the Imperial Grand Dragon of the Original Knights Of The Ku Klux Klan, as well as a a strong leader, promoter, and supporter of several white supremacy groups.

William Branham was directly responsible for igniting the ministry of Jim Jones in Indianapolis. From 1956 through 1957, Branham and his campaign team held meetings with Jones at Peoples Temple and the Cadle Tabernacle, and Branham held private consultations with members of Peoples Temple. There are deep concerns when you compare Branham's "message" to Jim Jones' "message."

The Sarah Branham Investigation - Part 1: A Cry For Help

William Branham vs. The Bible: Genesis 7

William Branham vs. The Bible: Genesis 6

Connecting You with God and Others

This is the podcast page for Ben Bergren. He is the Lead Pastor of Bethel Lutheran Church of Cupertino, CA. Ben teaches with relevance and passion. Listen in each week as he teaches from the Bible.

By this we know that we love the children of God, when we love God and obey his commandments. For this is the love of God, that we keep his commandments. And his commandments are not burdensome” (1 John 5:2–3). The word “Theonomy” comes from two Greek words, theos (God) and nomos (law). Together, these words simply mean “God’s law.” Since every Christian has some view of the role of God’s standards for living, every Christian believes in “Theonomy” to some degree. What has come to be called “Theonomy,” however, is a particular view of the role of God’s law that includes the application of aspects of Old Testament law to all of life including the social realm and civil government. Those who hold to this view are properly called “theonomists.” The Bounds of Love mostly concentrates on this more specific view. Dr. Joel McDurmon’s The Bounds of Love is a new introduction to Theonomy, the view that Scripture, including the law of Moses, contains abiding principles for civil government. The book is written with exceptional clarity. It reviews the traditional case for theonomy developed by Rushdoony, Bahnsen, and North, and it adds some creative approaches to controversial questions. For example, McDurmon develops a new approach to the question of what laws carry over from the Mosaic covenant to the New, and which do not, and he presents an attractive and detailed portrait of what a theonomic society would look like in the twenty-first century.