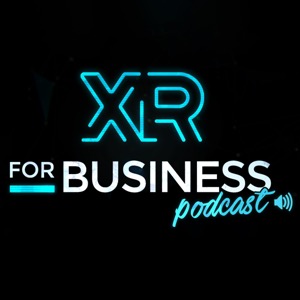 Attending Digital Concerts in XR with The Boolean’s Anne McKinnon

The average concert is a tour de force for one’s sense of sound (and, if the bass is decent, one’s sense of their bones vibrating). But Anne McKinnon from The Boolean isn’t interested in “average” concerts. She wants to use XR to make concerts a sensation for all the senses.

Alan: Welcome to the XR for

McKinnon from The Boolean. Anne is a VR and AR consultant and writer.

She is an editor and contributor to Charlie Fink’s book

“Convergence.” Charlie, as you may remember, was one of the

very first episodes we had. Her consulting bridges the gap between

entertainment and technology. As an advisor, Anne grows and curates a

community of digital artists to leverage new and emerging

technologies. Anne is actively engaged in the entertainment industry

at the intersection of music, arts, gaming, and tech. You can learn

theboolean.io. Anne, welcome to the show.

really excited to speak with you today, and also cannot wait to speak

to a lot of the listeners.

We’ve known each other quite some time, and you do some work with VR

Days and they’ve been on the show as well. And it feels like a

family, like a network of people that are all just kind of coming

together. So how did you get into this crazy world of technology?

Anne: Actually, VR Days was one

of the major events I went to and I started working in tech. And it

problems in VR, what can we use it for, and how can we make

improvements to every aspect of our lives? And VR Days was one of the

best conferences that bridged the gap between technology and arts,

and also brought together everyone from military to education to

healthcare, and also the creatives to drive that innovation. So that

way, I guess I met some of the teams that I work with now and we’re

audiences around the world.

Alan: Let’s unpack that. What

are some of the problems that you’re working on solving?

Anne: I want you talk a lot

years, and that’s with Miro Shot. So Miro Shot is a band and we’re

touring a virtual reality live concert around the world. So to kind

of put in detail about what that looks like, is that the audience is

the audience enters, they have VR headsets on and they are immersed

in dreamscape visuals, and the pass-through camera’s a big part of

what we do to connect the realities, and to experience music in a new

way. And one of the problems that a lot of VR experiences have is how

do you reach audiences around the world with live performance, and

also how do you reach a large scale audience? A lot of what we’re

home. And this is something we’re doing with the band, with up to 30

people at a time for live concert.

Anne: Simultaneously in VR. So a

lot of it is based around the concepts of gaming. So we’re really

looking at VR as something that’s not contained, taking from

classical genres, from theater and cinema and gaming. So everything

starts in a gaming lobby. And they start the experience together and

depending on where they look, they’ll be able to experience different

parts of the world of the music. And they’re also because of the live

Bundling the Best of AR with Ease of Use, with BundlAR’s John Martin

Use The Force (Feedback), Luke! With SenseGlove’s Gijs den Butter

The Right Time to Invest in VR, with MetaVRse’s Alan Smithson and Alex Colgan