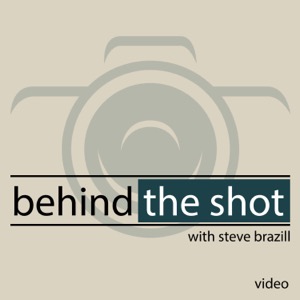 Behind the Shot - Video

On occasion I have a guest on Behind the Shot I find hard to describe. With SanDisk Extreme Team members Jonathan and Angela Scott that is not the case. In fact I have so much I want to say that I'm worried I will end up with a novel.

I first learned of Jonathan and Angela through Rick Sammon, and in fact Rick has sent me a number of emails over the years telling me I need to get The Big Cat People on the show. Well, it's finally happened, and I couldn't be more excited to have Jonathan join me on this show.

Jonathan and Angela Scott are award-winning wildlife photographers and authors who have made their name documenting the lives of lions, leopards and cheetahs in the Maasai Mara National Reserve in Kenya. Over the past 40 years, they have recorded every aspect of their existence and their travels through their stunning wildlife photography.

The only couple to have won the Overall Award in the prestigious Wildlife Photographer of the Year Competition as individuals, Jonathan and Angela are two of the best wildlife photographer working today. They have written and illustrated 34 books, including their Sacred Nature: Life’s Eternal Dance (HPH) that won the Gold Award for Photography in the prestigious Independent Publishers Book Awards, 2017. They hope to publish the second volume, titled Sacred Nature Volume 2: Reconnecting People to Our Planet, in early 2021.

Jonathan is the presenter of the popular BBC/Animal Planet wildlife television program Big Cat Diary and has been featured in many other documentaries including two series of Elephant Diaries, and Big Bear Diary. He presented The Truth About Lions for BBC2 in 2011. Their latest TV show, currently on Animal Planet and Discovery, is Big Cat Tales.

In addition to their artistry, Jonathan & Angela have also committed their lives to fighting for wildlife conservation. They are currently founding their own non-profit organization, The Sacred Nature Initiative (SNI). This initiative aims to Inspire, Educate, and Conserve, by forging meaningful partnerships with educators and local conservation organizations worldwide to address the loss of wilderness and plight of endangered species.

There is a Kickstarter campaign running from February 2 to February 28, 2021 for the new book, Sacred Nature Volume 2: Reconnecting People to Our Planet, that will also help benefit The Sacred Nature Initiative. I have seen some previews of this book, and at 14" x 11", with 288 pages and 140 images, this is going to be pretty awesome.

Join The Big Cat Man, Jonathan Scott, and me as we chat about photographing in the Maasai Mara, the ethical considerations related to wildlife photography, and more, on this episode of Behind the Shot.

Connect with Jonathan and Angela