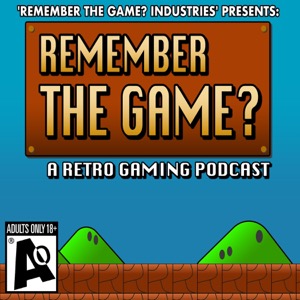 I wasn't sure we'd ever cover Super Mario Bros on this show. Of course it deserves an episode, but I was worried we wouldn't be able to do the game justice. I've never connected with a piece of media, in any form, like I have with the NES's flagship title.

But between the evolution of the podcast, my comfort and confidence level behind a microphone, and the YEARS of badgering by my guest this week, I think it's finally time. Episode 150 calls for a special game, and there's nary a game on the planet I consider more special than Super Mario Bros.

My guest this week is "the gentleman of RTG Industries" David Rae, and we shattered the record for the longest episode of the podcast while talking about Super Mario Bros, going for almost 2 hours. This was a very sentimental episode of the show for me, and I hope you hot dogs dig it.

And before we talk goombas, flowers, and those fucking Hammer Brothers, it's another (long) edition Remember The Game Infamous Intro!

This time around, we talk about stuff like launching a Youtube channel/podcast. I also design my own Mega Man game, and we speculate about physical vs digital games in the future. I also debut the first ever song of RTG Industries; courtesy of fan of the show Michael Leavitt.

AND, we have another round of 'Play One, Remake One, Erase One'. This time, it's the "franchise" edition, featuring Mario, Zelda, and Pokemon.

And find David's show at: