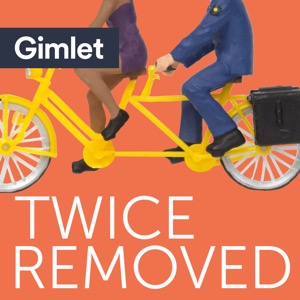 Nazanin Rafsanjani is a beloved member of the Gimlet family, overseeing Gimlet’s advertising wing. She also has an incredible family story, moving to the U.S. from Iran during the Iran-Iraq war. And Nazanin’s family tree is filled with people who left their communities and started over, from the victim of an epidemic, to two literary icons. We’ll tell these stories, and introduce her to a mystery relative.

Jeffrey Einboden’s new book which talks about Emerson and his Persian influences is “The Islamic Lineage of American Literary Culture.”

You can reach us at TwiceRemoved@gimletmedia.com. We tweet @TwiceRemoved, and we’re also on Facebook. Twice Removed is a production of Gimlet Media. I’m AJ Jacobs, we’ll be back next week with more Twice Removed. Hopefully you’ll be filled with delight… or perhaps abject horror. You never know. It’s family.

Blue Apron- Get your first three Blue Apron meals delivered for free by going to blueapron.com/twice

Squarespace - Go to squarespace.com and use the offer code "TWICE REMOVED" at checkout to get 10% off your first purchase

And be sure to check out another podcast about family: The Longest Shortest Time, hosted by Hillary Frank!

A Preview of Coming Attractions