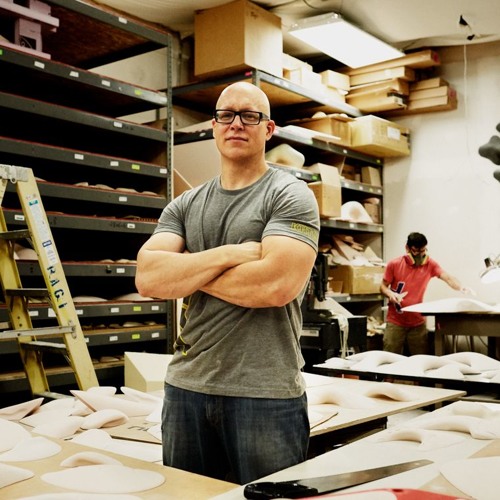 Run This World with Nicole DeBoom

I met Ian Powell over four years ago when we were trying to sublet our offices in Boulder. There was something about him that struck me as different, so I went home and googled him. This is what I found - a 2013 article by Caroline Treadway in Rock & Ice that begins like this, "Ian Powell hit bottom three years ago on Thanksgiving in a dumpster near Denver. Huddled under a layer of trash, he was freezing, dope-sick and hadn’t eaten for days."

Turns out Ian has led an extremely interesting life, so interesting that it may be a miracle that he's still with us today. You would think that after reading about his brushes with death and destruction, drugs and prison, I may elect to NOT rent our space to him, but the opposite was actually true. I was both intrigued by his sordid past and inspired by his ability to turn it all around. I didn't even have a podcast yet, but I knew that one day I would need to learn more about his story.

Ian is the founder of Kilter Grips - a Boulder company that makes grips for climbing walls. If you've ever climbed in an indoor gym, you have quite possibly touched a hold designed by Ian. Kilter is widely regarded to be one of the best grip companies in the world, and Ian is widely regarded as one of the best shapers. What makes his work so special is that he is actually an artist. Yes, he wants to make great hand holds. Yes, he wants to have a successful company. Yes, it would be great if he made money. But he does this work because he is called to it. He is an artist at heart and crafting climbing holds is the purest form of art to him.

Ian grew up in a dysfunctional family. He landed in Waco, Texas, where he barely graduated high school and became obsessed with climbing. After high school he made his way to Boulder, Colorado, and started working in the climbing industry.

But somewhere along the way, as he started to see success as a shaper and later a fine artist, Ian discovered drugs. Being the all-in guy he is, Ian's path led to full-on drug addiction, homelessness and criminal activity. Ian was eventually busted and sentenced to time in prison. It wasn't until he was locked up that he finally kicked his addiction and got healthy.

2020 marks TEN years since Ian left prison to restart his life. Our conversation is one of my favorites. Ian is incredibly humble about his difficult past. He openly shares his mistakes and all the lessons he's learned from them. He knows how quickly life can change and I think he is navigating his path with an intensity that you can only have when you know what's on the other side. Today we talk about:

Podcasts: He wanted to let you know that he listens to more than Terry Gross, Adam Carolla and Joe Rogan!

Creating: This is a big theme throughout our conversation. Creating businesses. Creating fine art. Creating holds. Creating things that give us purpose.

Finding the flow state: in work, in life, in art

Early childhood experiences: His father's suicide and how his mother showed her love and support

Starting eGrips: ludicrous tales of being a young entrepreneur

Discovering drugs: How quickly his life fast-forwarded down a destructive path

Homeless and degenerate in Denver

Prison: I literally ask, "What was prison like?" You must listen to this part.

Turning his life around after prison

And so much more

This is an absolutely gripping episode. It's one thing to survive the experiences Ian has survived. It's another thing to be able to share openly and humbly so that others may learn something and find some inspiration to help them move through their own difficulties. In the end, I love Ian's final nugget. It's all about creating for the pure joy and fulfillment of creation. With no attachment to the outcome. I hope you listen today with no attachment, just let the messages flow and find your own zen state while they do.

167 - Mike Reilly the Voice that Brings You Home

164 - Exercise is a Lifestyle with Christie Bruner

162 - Ali Kearney's Journey from Self Harm to Self Love