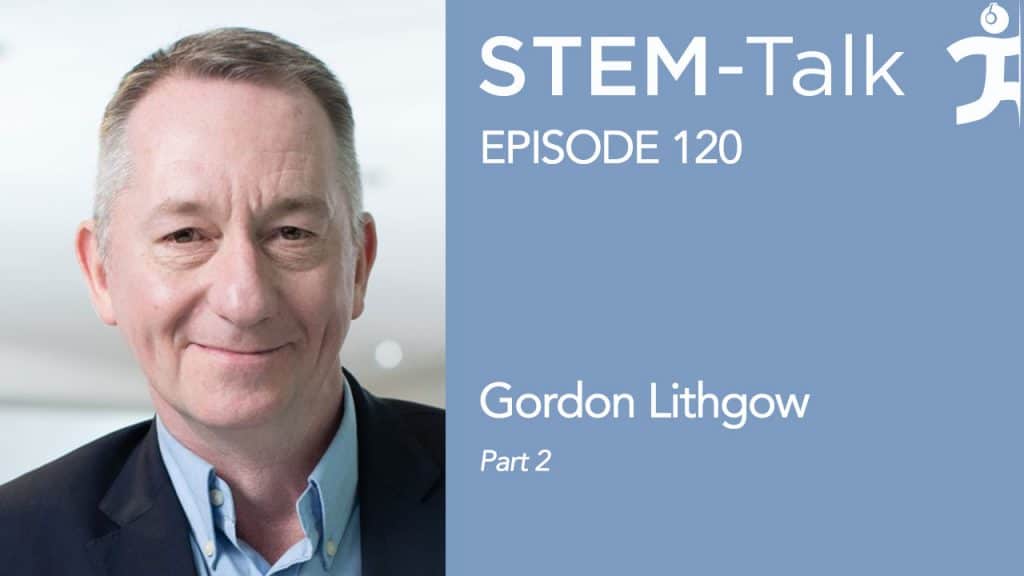 Ever since Cell Metabolism published a study that found the naturally occurring metabolite alpha-ketoglutarate reduces inflammatory signaling as well as chronic inflammation, listeners have been asking Ken and Dawn for their take on the paper. Today, we have the author of the paper, Dr. Gordon Lithgow, as our guest on STEM-Talk. We talk with Gordon in-depth about his study and the potential of alpha-ketoglutarate to have positive effects on lifespan and healthspan.

Gordon is a professor and vice president of Academic Affairs at the Buck Institute in Novato, California, where his research focuses on uncovering genes and small molecules that prolong lifespan through enhanced molecular stability. Today we cover Gordon’s research into alpha-ketoglutarate in the second part of a two-part interview. In part one, episode 119, we asked Gordon about his fascination with C elegans, a microscopic worm that Gordon and other geneticists study and often use for their research. He particularly covered two of his studies involving C elgans: one that looked at the role that protein homeostasis plays in aging;  and another study that found vitamin D3 improves protein homeostasis and slows aging.

A native of Scotland, Gordon researched the biology of aging at the University of Manchester in England before moving to the Buck Institute in 2000. Gordon is married to Dr. Julie Andersen, who was our guest on episodes 117 and 118 and who also is a researcher at the Buck Institute.

00:03:20 Dawn opens part two of our interview with Gordon by mentioning his most recent paper on alpha-ketoglutarate, which has generated a lot of buzz. This study suggests there is a metabolite that one can buy in a health food store that may have a positive effect on lifespan as well as healthspan. Dawn goes on to mention that alpha-ketoglutarate (AKG), is a naturally occurring metabolite. She notes that previous studies on it have shown that blood plasma levels of AKG can drop up to 10-fold as we age. Dawn asks Gordon to explain what AKG is and how it is involved in so many of our fundamental physiological processes.

00:07:41 Ken mentions that in the study, Gordon fed the mice calcium AKG. Ken asks why Gordon chose calcium AKG as opposed to arginine AKG, which is a dietary supplement often used by athletes and bodybuilders to improve their performance and reduce muscle fatigue.

00:09:22 Dawn mentions that when Gordon’s paper came out in Cell Metabolism, Gordon was quoted as saying, “The nightmare scenario has always been life extension with no reduction in disability.” Dawn goes on to state that this study showed that the middle-aged mice who were treated got healthier over time, and that even the mice that died early saw improvements in their health. Dawn asks Gordon to elaborate on this apparent extension in healthspan.

00:12:41 Dawn asks Gordon about the significance of the finding in his study that calcium AKG reduced inflammatory signaling, as well as chronic inflammation, as it relates to degenerative aging.

00:14:57 Ken asks if Gordon’s study has been replicated in any other strains of mice.

00:18:54 Dawn mentions that Ponce De Leon Health, which is based in Florida, is marketing a formulation of calcium AKG under the brand name Rejuvant. She goes on to mention that Gordon and his colleagues at the Buck worked with Ponce De Leon Health to develop the product and that Gordon owns stock in the company. Dawn asks Gordon to give an overview of this partnership and address the concerns that some people may have about a potential conflict of interest.

00:21:17 Ken asks Gordon to explain how the dose of calcium AKG used in the mouse study compares to t...