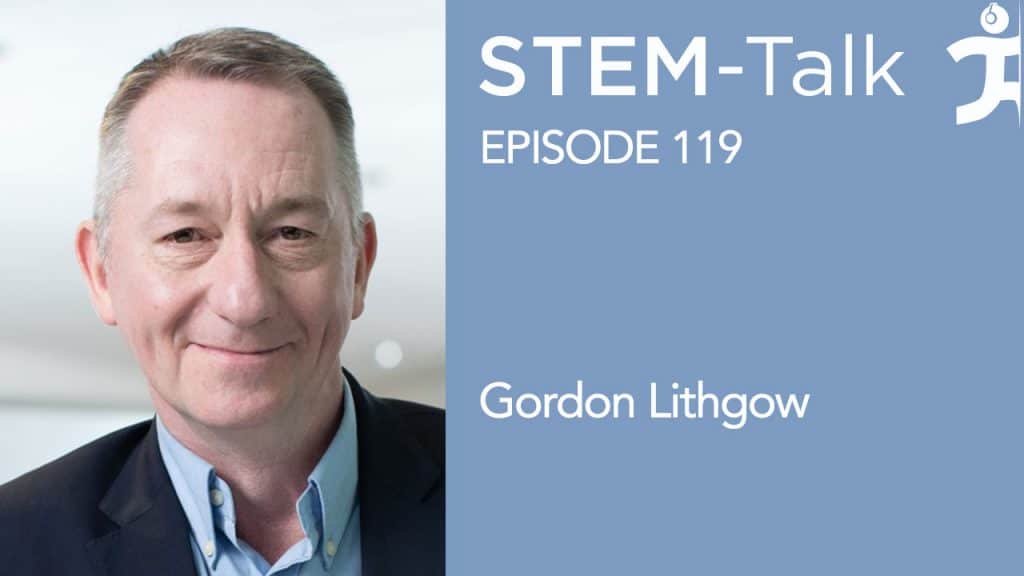 Our guest today is Dr. Gordon Lithgow, a professor and vice president of Academic Affairs at the Buck Institute in Novato, California. Gordon’s research focuses on uncovering genes and small molecules that prolong lifespan through enhanced molecular stability.

Because our conversation with Gordon was so extensive and fascinating, we have split his interview into two parts. In today’s part one of the interview, we talk to Gordon about his background and early studies as well as his fascination with C elegans, a microscopic worm that Gordon and other geneticists study and often use for their research. We particularly talk in depth about two of Gordon’s studies involving C elgans: one that looked at the role that protein homeostasis plays in aging;  and another study that found vitamin D3 improves protein homeostasis and slows aging.

A native of Scotland, Gordon researched the biology of aging at the University of Manchester in England before moving to the Buck Institute in 2000. Gordon is married to Dr. Julie Andersen, who was our guest on episodes 117 and 118 and who also is a researcher at the Buck Institute.

In part two of our interview with Gordon, we talk to him about a recent study of his that found the naturally occurring metabolite alpha-ketoglutarate reduces inflammatory signaling as well as chronic inflammation. The study has generated quite a bit of buzz because it suggests there’s a readily available metabolite that may have positive effects on lifespan and health span. As a result, Ken and Dawn have been getting numerous questions from listeners about alpha-ketoglutarate and Gordon’s recent study that ran in Cell Metabolism, which Gordon talks about in depth in part two.

00:03:59 Dawn opens the interview asking Gordon about growing up in a steelwork town outside of Glasgow, Scotland.

00:05:07 Dawn asks Gordon how a young boy who had aspirations of becoming a professional rugby or soccer player suddenly becomes passionate about birdwatching.

00:07:07 Gordon talks about how he went to the University of Strathclyde after high school and how he was the first in his family to attend college.

00:07:48 Dawn asks Gordon why he shifted his academic interests from microbiology to genetic engineering.

00:09:05 Ken asks what led Gordon to attend the University of Glasgow for his doctorate after getting a degree in microbiology.

00:10:04 Ken asks why Gordon went to Switzerland after receiving his doctorate.

00:10:57 Ken asks what prompted Gordon to head to Boulder, Colorado, and why he became so interested in the biology of aging.

00:12:57 Dawn mentions that while Gordon was working in Tom Johnson’s lab during his post-doc, Gordon made what Tom referred to as an amazing discovery. Gordon had found that a single heat shock to worms increased their lifespan by 15 percent. Dawn asks Gordon to talk about this discovery as well as his paper that ran in PNAS.

00:15:46 Ken mentions that because of Gordon’s discovery, many people have developed an interest in sauna.

00:16:57 Dawn mentions that a number of years after discovering that heat shocking increased the lifespan of worms, Gordon followed up on that study and demonstrated that giving the worms repeated mild hormetic heat treatments increased their lifespan even more. Dawn goes on to ask if, since this follow-up study, Gordon has a better understanding of hormesis mechanisms at the cellular and molecular level and how that might relate t...